Reached back into the vault for this photo, captured in Paris back in September 2012.

Towers of glass, steel and concrete are not the first things that come to mind when you say the word Paris.
And yet, tucked away in La Défense, is a pocket of futurism surrounded by a sea of history.

Spotted this wonderful piece of street art not far from the Centre Pompidou when I was in Paris a year ago. The title of this post refers to the sign on the door.

All the guide books said the grand château at Versailles was one of the world’s more ornate palaces. And by golly, they were right.
I’d go so far as to say no guidebook of any kind can prepare a first-time visitor for the full extent of this place’s grandiosity.
That, coupled with the crush of people inside the building’s hallways … it can almost be too much.
Go mentally prepared for what you’re about to take in and what the surroundings will be.
Give yourself pretty much an entire day so you can pace yourself.
If claustrophobic feelings strike, head outside and clear your mind in the sumptuous gardens behind the château. Wander far enough and you’ll even see farm animals on the property. It’s truly lovely.
These images were taken on my visit there in September 2012.

Flipping through some old photos today, I noticed I’ve accumulated images of quite a number of theatre marquees. Here are some of my favourites. 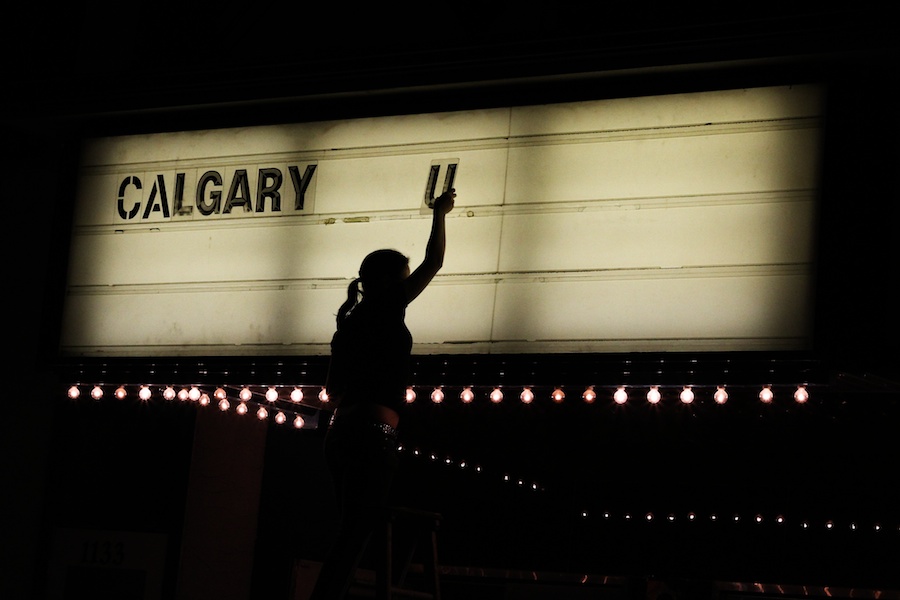 The defunct Uptown Theatre in Calgary.

The Corona in Montreal.

Another shot taken in Paris whilst playing around with the special effects on my portable camera. This was supposed to give the photo an old-timey feel.

The Montparnasse Tower might not the the prettiest thing on the Parisian skyline … but at least when your at the top of it, you don’t see it!
In this view, we’re looking at the Eiffel Tower with the modern skyscrapers of La Défense in the background.

Wouldn’t you love to have dinner in a place like this? Well, this particular room is behind a velvet rope at the Louvre in Paris. So no, no eating here. Only a feast for your eyes. 😉

Several months ago, I told you about my efforts to eat frugally in Amsterdam.
A fellow-traveller I chatted with at one of Amsterdam’s many fast-food falafel shops warned me about the cost of eating at my next destination, Paris. She’d just come from there and could not believe how much money she’d spent on food: Something like €20 per meal.
I was fully expecting a similar experience.
As it turns out, there are ways to get around the Parisian stereotype for expensive food.
Breakfast
I stayed in a budget hotel in the 10e arrondissement near the rue du Faubourg Saint-Denis. They offered hot breakfast for €7, a service I used only on my last morning there.
The rest of the week, I made breakfast with food from a local market that kept well for several days without refrigeration: Croissants, apricot jam, fresh bananas and commercial apple sauce. That cost about €15 total for six meals. I admit it was boring … but it was filling and relatively healthy. Besides, I’m the kind of guy who’s happy eating different kinds of Mini-Wheats for breakfast every day.
Coffee is cheap and plentiful in Paris, so I waited till I left the hotel to satisfy my craving for caffeine. There are locally owned cafés everywhere, as you’d expect.
Lunch
Look for holes in the wall, take-out windows and food trucks.
There are baguette sandwich windows all over the place. Falafel, shawarma and souflaki are tasty take-out alternatives. If you’re feeling homesick, there are carts selling North American style hotdogs.
Lunch can cost you no more than €5.
Of course, there are some days when you’re at places like the Louvre or the Château de Versailles. You might not want to hunt for a meal off-site. In those cases, be prepared to pay a bit more.
Dinner
There were lots of budget hotels alongside the one where I stayed but much of the area is residential. Because the Faubourg Saint-Denis isn’t as touristy as other neighbourhoods, it offers price advantages when it come to restaurant meals.
Bistros and cafés abound if you’re looking for traditional French fare. There’s also a strong international influence there, with lots of restaurants serving Mediterranean, Middle Eastern, North African and Asian cuisines.
Most sit-down meals can be had for under €10. The cheapest dinner I had was salad, lamb curry, and rice at an Indian restaurant for €6.50. Another night, I “splurged” on sashimi for about €15.
Deals can be had inside tourist zones, too. On my last full day in Paris, I found a bistro near the Centre Pompidou, where I had a very tasty pan-seared rabbit leg with a side of string beans and home fries for €12.
Location, location, location
Eating inexpensively doesn’t have to mean eating poorly.
The heart of Faubourg Saint-Denis is only a few minutes walk from the Gare du Nord but restaurant food at places closer to the train station is easily double the price or more.
If you’ve got the time, walk a few streets over and explore the menus. You get to see a new neighbourhood and perhaps save a few euros without sacrificing on taste or quality.
Bon appétit!