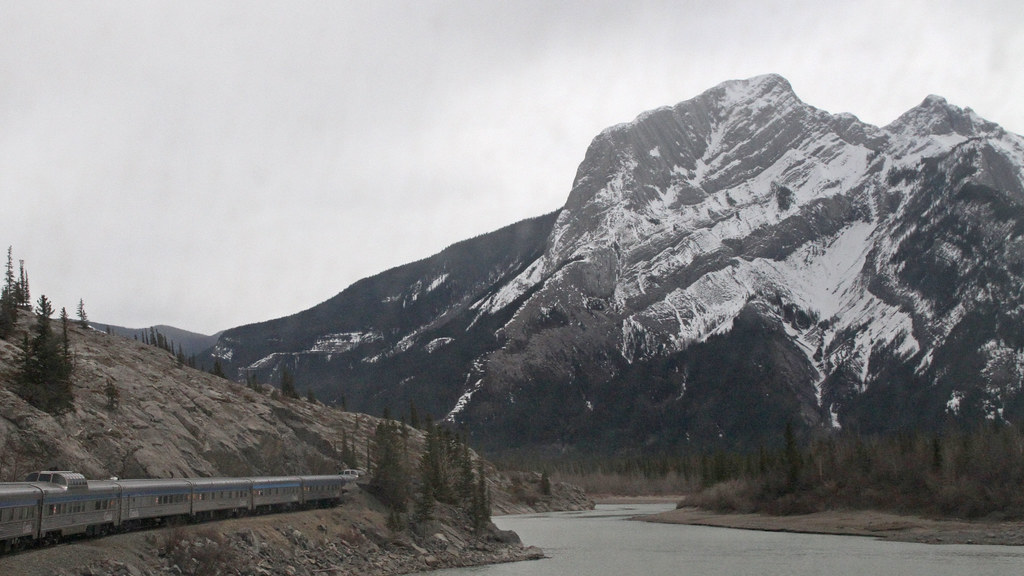 Via Rail’s Canadian in Jasper National Park. The view is from one of the forward Skyline dome cars, looking back toward the back of the train. Snapped on my cross-Canada train trip back in April 2013.

Instinct sent my left hand diving into my pant pocket, seeking a cellphone that wasn’t there.
What time was it?
I wasn’t even sure what time zone we were in anymore.
It took another second or two to realize time didn’t matter. Not right now.
As my final night aboard Via Rail’s “The Canadian” drew to a close, about a dozen of us were enjoying a live show performed by musicians Scarlett Flynn and Kevin Howley in the economy class Skyline lounge car.
The train was rolling southward along the Thompson River valley on its way to Kamloops, B.C., having left Jasper, Alberta, that afternoon.
Backpackers exploring Canada, people moving to a new job or to school, or just your garden-variety commuters with time to spare (as was the case for me), together joining the musicians in song.
Forget about trying to find that magical atmosphere aboard a plane.
When the party broke up and we scattered back to our rooms and seats for the night, we were less than 12 hours from Vancouver.
Too bad, I thought. It would have been just fine if time stood still.
END_OF_DOCUMENT_TOKEN_TO_BE_REPLACED

Just some random fun with depth of field. Shot while I was aboard Via Rail’s “The Canadian” back in April. One of the Skyline dome cars was stocked with a few board games, including this one.

Via Rail won’t let dirty windows ruin a Rocky Mountain vista. Here are some employees hard at work cleaning the windows of Toronto-Vancouver train “The Canadian” during a station stop in Jasper, Alberta.

This is what rural Manitoba looked like, just about a month ago, around Portage La Prairie. Captured from aboard Via Rail’s Toronto-Vancouver train, “The Canadian”.

To my mind, one of the neat things about long-distance trains is being able to eat in a dining car or café car of some kind.
Above is the type of dining car used aboard Via Rail’s Halifax-Montreal train, “The Ocean”.
Below is a similar scene, captured nine years ago, in a different, older type of dining car that was once regularly used on this train.
Difference between the two: The newer cars don’t have a full kitchen, just a galley where they can prepare simple dishes and heat catered gourmet meals.
Happily, the meals are still served using real dinnerware.
EDIT: I should add that Via Rail’s Vancouver-Toronto western transcontinental, “The Canadian”, still uses those old-style dining cars. The decor has been updated since I took the photo below.

Views such as this is why people like to hang out in the dome-observation Skyline and Park cars aboard Via Rail’s The Canadian. Got this image last month as the train made its way westward toward the town of Jasper.

This is the beautiful ceiling in the main hall of Winnipeg Union Station.

At the end of June, Via Rail announced it was cutting service on some routes while looking to increase service on others, due to customer demand.
One of the route to see a reduction is the Montreal-Halifax train The Ocean, which would see its frequency drop to thrice weekly from its current six-day-a-week operation.
Despite eyewitness reports from one of my cousins and Via employees who say the train is very much full, especially in high-season, Via claims ridership has dwindled by about half in the last 15 years, especially with faster and cost-competitive choices from Air Canada, WestJet and Porter.
I’ve always had a soft spot for The Ocean. When I lived in Montreal, it was the primary means of transportation whenever I wanted to visit another cousin in Halifax (the one who got married, as was noted a few posts ago).
Of course, it was leisure travel for me. But every time, I’d end up meeting people on the train for whom it was a necessary and comfortable means of getting to Montreal, Moncton or Halifax for medical appointments and other such activities.
I understand that for the leisure market, three-day-a-week scheduling is of practically no consequence.
But the reduced schedule would be a terrible blow for those who live along the line and need the train as a means of conveyance, not just for a pretty picture window or the seasonal dome car.
As a means of reducing the impact of the service reduction, here are two low-cost ideas for Via to consider:
• On days when the full Ocean train is not running, use a coach-only train or a few self-propelled Budd Rail Diesel Cars to provide minimal service between Acadian towns on the Northumberland shore, say between Bathurst and Moncton.
• Stagger service between The Ocean and The Chaleur (Montreal-Gaspé) in Quebec whenever possible, so the impact of The Ocean service reduction is close to nil between Montreal and Matapedia.

I do fear, however, that this round of budget cuts has essentially carved Via into two tiers: The Montreal-Toronto-Ottawa triangle versus everywhere else.
If you live in the busiest parts of Via’s network, you will get all their attention and effort. Better infrastructure; better frequencies; nicer stations; more amenities.
If you live everywhere else, however, you don’t really need the train to travel for essential business.
It’s an inaccurate picture of the country and how we want to travel. Not everyone is able to fly; not everyone want to be stuck on a motorcoach for days on end.
And it does not bode well for attempts to maintain broad, public support for the train as a means of transportation across this country.
(This is especially true right here, in Calgary, which was amputated from Via’s network way back in 1990. As I’ve stated publicly in the past, that’s a whole generation of people for whom passenger trains are a non-entity in their lives. Not cool.)

On a more basic level, the cuts speak to the financial inequality between this country’s three major modes of transportation.
Via’s competition, airlines and bus companies, are allowed to use public goods (the air and public roads) as a means of moving people, pretty much free of charge.
Via Rail, however, must pay a mint to use infrastructure (rails) owned by private firms. (It’s the perfect kind of public-private partnership, really.)
I seriously wonder if the price points for bus and air service would rise if they actually had to pay fair-market value to use the public good they need to do business. It would be cool if some economist somewhere could actually do the math and see if my suspicions are correct on this point.

Images from top: A Budd stainless steel HEP1 car at the Halifax train station (June 2012); a westbound Ocean during a stop in Moncton (November 2003); the busy concourse inside Montreal Central Station (March 2009).